He did not have to do any of this. He had what anybody would consider to be a pretty great life before he decided to seek office. (Pardon the sniffles again. They're permanent, folks. Sorry, but they are.) He and his family were treated horribly every day for four years. Now, you can say, "Rush, they did ask for it. They sought power." 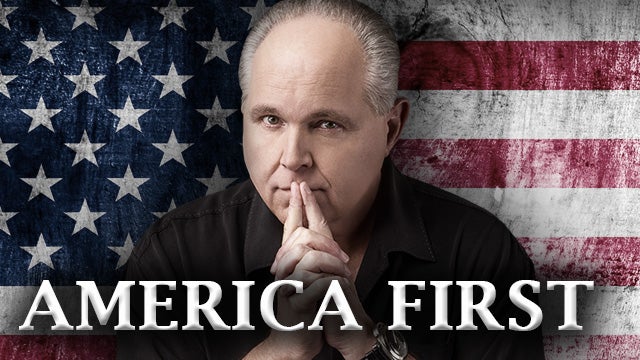 And in all of this noise, I won't forget, nor should you, the good that was done under the constant incoming fire and criticism. He did put America first. He put belief in people, that our country is special and worth building up, first. He didn't waste any time on cutting down America or saying we need to be equalized with the rest of the world.

He renewed people's belief that they can better themselves simply because of where they live. He renewed people's belief in the entrepreneurial spirit that anybody... This is the thing" Anybody in this country can overcome odds, anybody. You don't have to be born elite in this country. Now, we're trending in that direction. But the past four years, you didn't have to be.

You could overcome anything. And this is what Trump demonstrated and illustrated. It was one of the principal, primary conservative tenets. Whether he knew he was doing it or not, I don't know. But he did it. And he hung in with it. He governed by "find a way to make it work." I never heard him make excuses.

Well, I take that back. He did make excuses. And that ending, the Capitol, that whole thing, it was such a terrible ending because it overshadowed everything else. And I've got a list of these achievements and be I've got a list of some of the criticisms as well.