BRETT: I remember a time way, way, way back in the past when, well, you know, rock 'n' roll was something targeted by those who were afraid of it, thought it would corrupt the youth. I know, I know, we're going all the way back to the 1950s and the sixties and the seventies, but it came back to life in the 1980s. And Rush Limbaugh did something so remarkable. It was one of the greatest bits of all time. It goes along with this theme of when Rush Limbaugh realized it was more than just a show and people took him seriously, perhaps a bit too seriously.

RUSH: The story that I can tell you very quickly that made me realize that I had to be really careful with satire and parody, do you all remember the Slim Whitman satanic message bit? I think I did it once. It's something I did in Sacramento, and I might have reenacted it here. But I read a story one day that some minister in Ohio had discovered that there was a satanic message in the theme song to the Mister Ed TV show if you played it backwards.

So I said to myself, okay, how can I make this funny rather than just sit here and tell people what this Ohio minister claims he found? I mean, where does an Ohio minister find a way to play the Mister Ed theme backwards? Why would an Ohio minister even do that?

And I found a song by Slim Whitman as the update theme, Una Paloma Blanca, which was translated as One White Dove or A White Dove. So I decided to find a satanic message in Una Paloma Blanca. I'm sure many of you are familiar with this. So I went into the production studio and we found a way to play it backwards and I got a guy to record a message through a harmonizer which changes the tone of your voice.

And the bit was that the devil was actually speaking to people through the Slim Whitman Una Paloma Blanca song, and I went through, you know, two hours of setting this up on the air and explaining it. And I'm thinking when it's over that people out there listening, "This is the funniest thing I've ever heard. This is guy is really good. We are fortunate to have this guy in our town on the radio. This is the kind of stuff you have to tune to The Tonight Show or something like that to hear. This guy is awesome."

And I'm proud as I could be, and I can't wait for the reaction and the feedback. And during a commercial break the general manager of the radio station came in and said, "How long are you gonna go with this?"

I said, "I don't know, but I think the way this is tracking right now, I could probably get three more days out of this."

He said, "Because people are calling their churches and reporting that there is a satanic message in what you're doing on the radio. And you admitted that you didn't know it so people are thinking if you can be fooled, anybody can, and people are wanting to know what they should do."

I said, "Wait. You mean people are calling their ministers believing this?"

I said, among many other things to him, I said, "Okay. This changes a lot about the philosophy going forward."

It took me easily 45 minutes to set this up. I milked it for everything. I opened the program that day in Sacramento by telling the audience that I was shaken by something that I had learned overnight. After reading the story of the Ohio minister who discovered a satanic message in the Mister Ed theme when played backwards, I began to be concerned. I said, "If it can happen to a minister, what about me?"

And so I began playing the various musical elements of my program backwards. I went to the production room, KFBK Sacramento, not expecting to find anything, but I had to do this. I had to find out if my program had been co-opted by Satan. And I'm telling people that it had been and that I was really on the verge of resigning because of what I had happen to me.

I said, "If my program can be as easily infiltrated by Satan as it has been, that I don't know that I should continue to be your host." I mean, folks, I milked it. I thought it was over the top. I thought I was making it obvious here, that the majority of people would be laughing themselves silly while maybe 1% -- So I was doing it on the basis that it was just a great bit. And I continued to act shaken and disturbed. And then I refused to give them the example.

So that started a bunch of phone calls, "You have to, you have to play it!"

I said, "No, you don't want to hear this." Of course, that's just reeling them in. I said, "I can't. No, no, no. You don't understand. You've already been subjected to it. I've been using this song for months here in the great peace march update, the global peace march update. You guys have already been exposed to it. I can't knowingly do this. That would compound it."

"You have to, you have to. You can't do this. You can't tell us that it's there and then not play it. You've got to."

I said, "I don't think most of you are emotionally equipped to deal with this. You think you are. But I don't think so." Well, of course, that just made people want to hear it all the more. Remember, this went for 45 minutes. And then the denial of service, the refusing to air it. So as part of the bit, quote, unquote, management walked into the studio and told me that because of the reaction, I had to play it. My job was on the line. I had to play this. 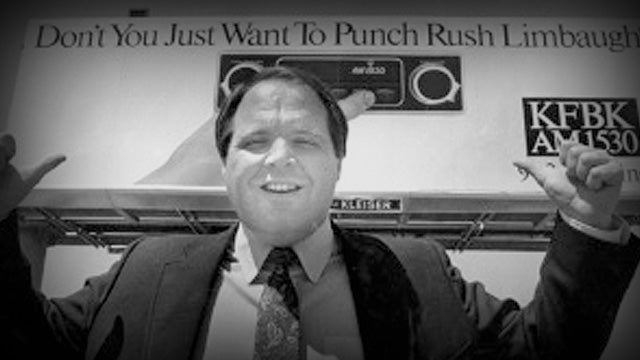 So I said, "Folks, if it were up to me, I would not, but now you've heard, I have been forced, I have been required. It's been required of me to do this." So 45 minutes and people are -- I don't know what they're expecting, but I have an idea. So now it's time to do this under protest, under duress, apologizing in advance, telling people you may not want to listen to this if you have any doubts whatsoever about your spiritual strength. If you have any doubts, do not listen to this. Of course, that just expands the universe. So here it was.

SATAN: Beelzebub! Yes, it's me, old devil himself. You found me out, you old rascal, lurking right here in the Slim Whitman record grooves. By the way, where did you find the turntable that plays backwards like this? I've been trying to find these for all my disciples so they can go around corrupting the youth of America and we can't find these backward turntables anywhere except in ministers' houses. And, of course, we don't like to go there very often. Ha-ha. Maybe you could drop me a note and let me know where to get one of these, and I promise I will never forget you. Well, I gotta be going on down the line. Way down the line, if you know what I mean. Ha-ha. Yeah. See you later.

BRETT: And there you have it. So what could be more obvious? So the phone lines are blinking like crazy and I'm thinking, "Ah, this is where people are gonna recognize how funny it was, how great it was." Then when people started calling their ministers and saying there was a satanic message being played on KFBK and it needs to stop, I said, "Oh, no." The point is that's when I realized that there's a certain percentage of the audience that's gonna believe.

So it became a real delicate balance. And when this guy called and said, "When did you realize that this was more than a show?" It was things like this that made me realize I had to look at this program and the way it was impacting people in ways I hadn't considered.

We'll take your phone calls straight ahead as we continue to fondly and laughingly and poignantly remember Rush Limbaugh. He's still with us.